The Mozilla Festival 2015 was held over 3 days, last weekend. It was my first time and I can say due to the events that unfolded, it won’t be my last. The weekend consisted of a fast paced build involving roughly 500 cardboard boxes which were assembled into a library, a garage, a garden and many other structures. 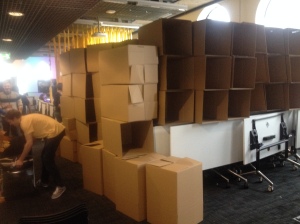 After the build stage there was a sort of science expo, this gave me a sense of whet the weekend would consist of. There was many many screen based products, tackling the web in many strange and wonderful ways. This was great, as my experience with screen based design is self-admittedly lacking. I was at MozFest of course in an educational sense as well as to promote myself as a creative designer. so this gave me the opportunity to increase my understanding and confidence in a new field.

The next day it was time for me and my colleague (Sylvester) to present U-WAVE. We were based in the “Garage” section of the “Global Village”. So first thing we built the structures we were going to be presenting in and around out of the hundreds of cardboard boxes that we had constructed the previous day. After that was done we started talking to people about our project. As I stated before most of the presented projects were screen based, this meant that our tangible project was a big hit. Many people took great interest in U-WAVE and even returned with their friends to show them what we had created. The biggest interest came from teachers and tech savvy creatives, there was lots of questions like “so I can make this?” and “Can I use this in my class?”. I’m happy to say that many people were inspired by U-WAVE and that there was a lot of promises of people making their own radio using our tutorial.

I love to learn and something I am not proud about is my lack of knowing when it comes to screen based interfaces. I partook in a workshop by Cyber-Ducks own Danny Bluestone and Benjamin Maugain on the second day of the event. There workshop was based around (UCD) User Centred Design in the context of App generation. Through this workshop I learned what techniques you must undergo in order to create an effectively designed experience for the end user.

Finally myself and Sylvester presented and displayed U-WAVE at the closing expo at the end of the day. During this event U-WAVE gained more interest than ever before. We even had someone say “I saw this online the other day! It’s BRILLIANT. I’m making one for sure!” it was a great experience to see so many people excited about the work I was doing. 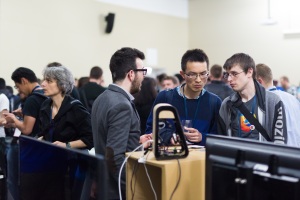 The event as a whole was a great success. I was able to learn new skills as well as hone my presentation skills. On top of all that I was able to meet many interesting and passionate people working in extremely interesting fields. I will be back next year to present again I’m sure, however next time I intend to host at least one workshop to share my experiences and skills.

From the start of this project we have been planning every step to coordinate with Mozilla’s open web ideology, a state of thinking that I share. I decided to make the project available to all by publishing the step by step build process online for free. The website that I used to do this is called Instructables.com; it is a completely free platform in with anyone can publish their step by step project online for open access. I had some experience of Instructables before, I actually published my process in create my own FM Radio back in 2011. Please follow this link to view my Instructables account.

I split U-WAVES step by step build process into 11 sections. These sections can be seen below and can be found in detail by following this link

I feel that creating open-source content is an essential part of what we must do to further the creation and education of creative technology. With the current technology that exist it is easy for anyone to build and create anything that their minds can dream up.

Below you can see the first iteration of our final form. This design allows us to fit all the technology within the radio body whilst also maintaining it’s structural, acoustical and user interaction superiority.  The first iteration is developed from 4mm MDF and AB flute cardboard; this allowed us to quickly prototype our technology within the radios contextual form. After doing this there was a few issues raised. The main constraint being, “how can we get the Pis USB ports available on the radios outside walls?”. As we need to be able to plug a keyboard and mouse into the device at points, primarily the set-up, it is of vital important that we developed a way of doing this. 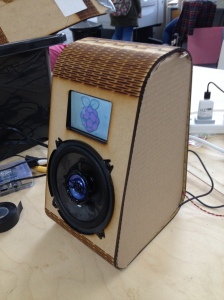 As a development point from now we will begin to attempt to wrap the piece in a thin hardwood veneer. This will get the radio a nice real wood finish as well as cover the splits in the wood left from the Dukta process. Hopefully one or two more iterations and we will have a completed product.

Now that the OS is working we can start to develop the radios physical form.  The sketch prototypes below were quick examples to demonstrate size and placement of features. It was important to us to decide of size as a starting point, this was possible due to us having already established all the technology that must be housed inside. 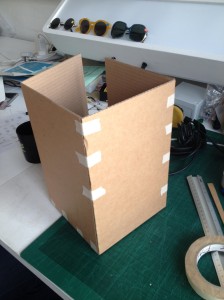 We then laser cut a Dukta style piece and played around with the form. We were able to come up with many different variations using this piece and it allowed us to move on our concept with each attempt. As can be seen below the forms we were focusing on were tall rather than wide and had one large speaker with a small screen above. We decide whilst prototyping the form, that the speaker and screen should be angled upwards in order to allow for a better user experience and sound direction.

I looked into many different interface examples, ranging from the most simple icon based layouts to the more complex multi-level set-ups. Some examples of these can be seen below. The main thing I learned from looking into interfaces is that the more functionality you have, the more difficulty the user has using it. 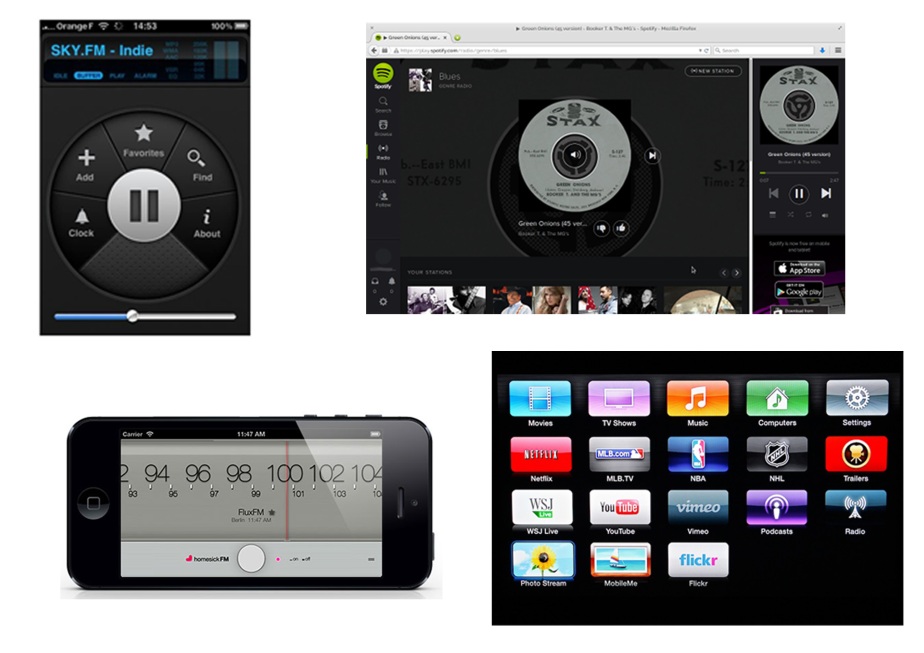 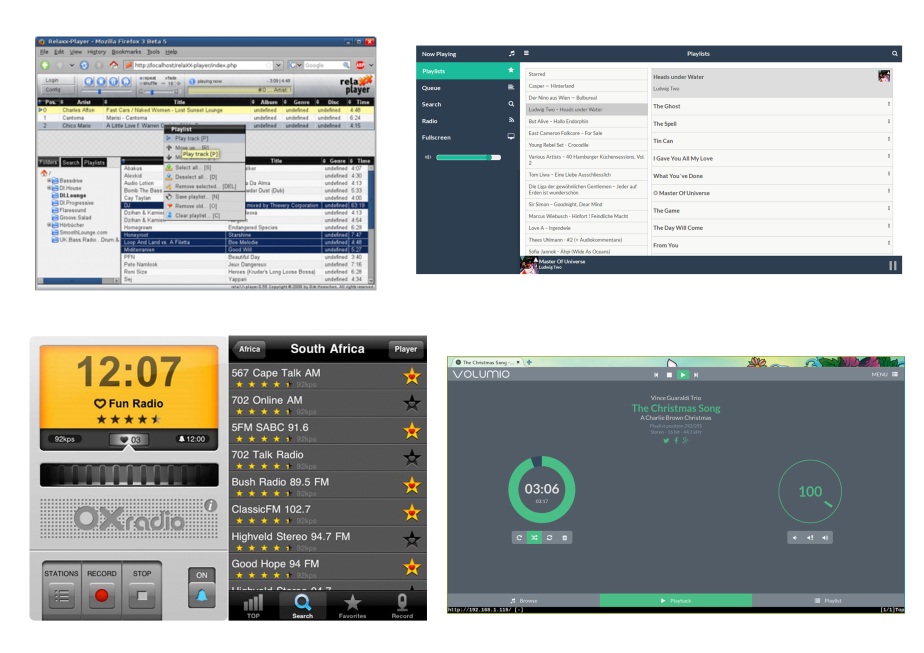 From looking into interface design and how the user interacts with them I came to the conclusion that our radio would have a simple icon based interface.  from our previous research into radio stations we knew we wanted six displayed in total. this allowed for a simple interface without any difficulties due to the screen size only being 3.5″ across. The image below is of the finished interface (displayed on a Computer screen) that myself and a good friend Petr Chutny developed. I personally have limited web development skills and so I called on a friend that I have worked with in the past. Using his experienced skills and knowledge he was able to develop this interface form me without any trouble. The interface is now hard-wired into the Musicbox server (Raspberry Pi 2) so that all external interfaces will display our new interface.

We decided quite early on that we did not want the radios interface to be a cumbersome array of dropdown menus and extensive login details. Because of this I decided to create a short one question survey online, asking the public what the favoured radios station was. After a week we reviewed the results and they can be seen below:

We then cross referenced the results with the national statistics for the most popular radio stations by, million, listeners every week.

the results gave us our top six:

Because we are developing this radio as “Open-Source” we would like to make every stage available for download, including the Manufacture of the physical radio form. The best way to do this is by using a digital fabrication tool such as a laser cutter or a 3D printer.

3D printing is great; it allows us to craft part that we would be unable to by any other means. As can be seen from the images below the detail that this process can go into is extraordinary indeed. 3D printing is on the rise and it is a very exciting field, this makes it a great asset to present at MozFest. It is also a great may to develop the open source aspect of the design as it can be created using just a couple of files. The down side to 3D printing is that it’s very expensive at times and the lower cost materials and machines can only produce a substandard piece. I have used 3D printers a few times and I feel that the part always appears cheap and not very attractive. As our radio does not have any parts that we will be unable to make by any other means I doubt we will use a 3D printer in our manufacturing process.

Laser cutting is a fantastic process that I use on a regular basis. The process is great because you can create an extremely accurate piece without creating a great deal of mess, in record time. The process is also great for our open source dialogue as the design can be published in hopefully just one file. Because of the fast paced outcome that can be generated from a laser cutter, it makes it a great prototyping tool. You can generate a great deal of prototypes to demonstrate every physical attribute of your design with ease. We intend to use a laser cutter actively within our design process, both within the final piece and the prototyping stage.